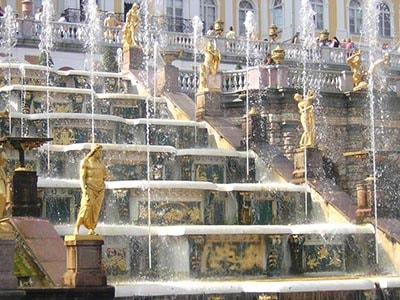 The summer residence of Peter the Great is located 30km west of St Petersburg on the shores of the Gulf of Finland. It was built to commemorate victory over the Swedes in 1709 and to represent the strength of Russian Empire. The residence was named Peterhof (‘Peter’s Court’ in Dutch) after its founder, Peter the Great who was inspired and invigorated by the victories of the Russian army.

Peterhof is famous for its parks with their numerous sculptures and fountains. The Great Palace, the Monplaisir (My Pleasure) Palace, Marli Palace, the Hermitage Palace, the Imperial Baths and Kitchen and pavilions around the parks form the Peterhof ensemble and with the fountains and sculptures render a festive splendor and brilliance to this unique monument to the victory in the Northern War which turned Russia into a strong maritime power.

Almost all of Peterhof’s ornamentation was supposed to glorify Russia’s naval might in a symbolic way.

Peter the Great began to build the fortress (called Kronstadt) on the island of Kotlin, to defend Russia’s new capital from attack by the sea. In bad weather he had to travel along the south shore of the Gulf where a small house was built for the tsar to rest. The tsar wasn’t content with this earlier building site of a retreat at the village of Strelna, so he chose another site 19 miles west of Petersburg on the Gulf of Finland.

Later the construction of the Great Palace and a small palace called Monplaisir (My Pleasure), began. Peter the Great himself chose the place for the park and participated by planning the layout of the gardens and fountains. Over 4,000 peasants dug the gardens, parks and canals.

The land on the southern coast of the Gulf of Finland was largely marsh and clay, so considerable irrigation work had to be undertaken before the gardens and parks of the new residence could be laid. The thick clay was removed in layers and replaced with soil and fertilizer brought up on barges. Thousands of maples, limes, chestnuts, fruit trees and shrubs were brought in from all over Russia and Europe as well as statues, paintings, rich fabrics, building materials and parts for the construction of fountains. The new plantations were frequently destroyed by floods and storms, but the replanting went on and on.

Peter the Great wanted to have a pearl of European architecture such as Versailles in France. At that time Versailles was a symbol of absolute royal power and hence the might of the state. Peter I wanted to build his own 'Versailles on the Sea'.

The development of such an ensemble was unprecedented in Russia, not only because of its size but also because of technical innovations it included. The construction of such a complicated system of waterworks in Peterhof, including a canal stretching from the Gulf to the palace, had never been tried before. Peter the Great chose the area because it included a 65 feet ridge that arose next to the flat shore and provided a marvelous view over the Gulf. This naturally occurring perspective was attractive for the Tsar because it was the perfect environment in which to create numerous cascades and fountains. He called the best specialists from around the world to create his 'Versailles': Andreas Schluter, architect of the Prussian court; Carlo Rastrelli; French architect Jean LeBlond; Italian architect Nicolo Michetti; Russian architect Mikhail Zemtzov; and the skilled craftsmen Paul Sualem and Theodor Tuvolkov, Russia’s first hydraulics engineer. Numerous engineers, masons, carpenters, and gardeners worked on Peterhof as well.

In 1720 Peter decided that the best way to provide the fountains at Peterhof with water would be to bring water through wooden pipes from ponds located 13 miles away. A complicated system of plumbing and pipes was under construction for several years, and the abundance of water that it supplied allowed the Tsar to build cascades and fountains throughout the Lower Park at Peterhof.

The Gala ceremony of opening the summer residence in Peterhof took place on August 15, 1723, and was marked by great festivity. Peter the Great himself led a small fleet along the new canal, and more than one hundred boats and ships tied up along its walls. He showed the foreign guests round Peterhof, enjoying their astonishment at seeing the 'seaside paradise'.

After Peter I’s death Peterhof became the property of the Russian royal family. Peter didn’t finish all of his projects at Peterhof and his daughter Elizabeth therefore commissioned Bartolomeo Rastrelli to add more lustre and embellishment to the beauty of Peterhof. He had had the experience of working alongside his father, designing sculptures for the fountains of Peterhof and decorating Monplaisir (My Pleasure), Peter’s small, private residence on the Gulf. The Great Cascade greets visitors arriving at Peterhof from the Gulf, and in it Carlo Bartolomeo Rustrelli glorified Peter’s military victories and accomplishments. The Grand Cascade, consisting of sixty-four fountains, is the most grandiose and magnificent creation of the Lower Park. Over two hundred gilded statues and decorative elements adorn the Cascade. The water rushes down the three cascade stairways into a large pool called the Scoop. In the centre of the scoop at the base of the natural 'cliff' the gorgeous fountain sculptural group of Samson Rending the Lion’s Jaws was placed on a huge pedestal. The idea of the 'Samson' fountain belonged to Peter the Great- as an allegory of the Victory in Poltava. But initially the figure of Hercules, fighting with a 7-headed creature was planned. The decisive battle was on the 27th, June, 1709, the day of St. Sampsonii (St. Sampson the Hospitable). The biblical hero is Samson too, fighting with a lion. So, his figure was chosen as an allegory to compare Russia and Sweden.

The monument was put up in 1735 to commemorate the Battle of Poltava. The jet (the tallest in Peterhof) spurting out of the beast’s mouth rises to 20 meters. The Marine canal connecting the Scoop with the Gulf of Finland is adorned with a solemn line of twenty-two identical water-spouts. Aligned with the Samson, these fountains emphasize the force and height of the main spray of Peterhof. The Cascade is arranged on a terrace slope and together with the Grand Palace surmounting the hill dominates the entire ensemble.

The sculptor’s son had to alter the proportions of the main palace to match the size, decoration and magnificence of the Great Cascade. Francesco Bartolomeo Rastrelli added galleries, wings, a lavishly decorated church with gilded cupolas and a pavilion crowned with a double-headed eagle to the original palace constructed during Peter’s time.

Rastrelli preserved LeBlond’s style of architecture when he extended the palace at Peterhof, but he noticeably changed the decoration of its interiors. The Main Staircase is richly decorated with gilded moldings, statues, and ceiling-paintings, and it leads to airy, open halls that are full of light. The Ball Room continues to dazzle visitors with its numerous mirrors and gilded carvings, and the Throne Hall, occupying the whole width of the building, is simply majestic.

The most distinguishing feature of Peterhof is its perfect combination of natural and man-made beauty. It is truly one of the world’s most beautiful architectural and natural ensembles.

Another fountain, the Chessboard Hill Cascade, contains some of the best waterfalls cascading over bronze dragons. Marble statues of antique gods are set along wooden steps on both sides of the Cascade. The multi-spray Roman Fountain, similar in design to the fountains in St.Peter’s Square in Rome decorate the parterres in front of the Chessboard Hill. The Triton Fountain shows Neptune’s son wrestling with a sea monster. The Pyramid Fountain was designed by Peter the Great and is made of seven tiers and 505 jets.

Some of the fountains in Peterhof are trick ones to amuse visitors. These water- jokes, typical of 18th century formal gardens, may take a carefree visitor by surprise drenching him through from hidden nozzles. The Little Umbrella fountain sprays out water from 164 jets as soon as anyone sits on a bench underneath it. The Little Oak fountain with its trunk and branches concealing finely built-in water piping sprays out water if it senses any weight approaching it. The Pebbles Fountains at the Monplaisir (My Pleasure) Garden drench visitors who sit on a nearby bench.
Beginning in the middle of the eighteenth century, this summer residence became the favourite retreat of the tsar’s family. Some receptions and celebrations continued to be held there until the October revolution of 1917.

To feel happy and make their spirits high, Russian and foreign visitors nowadays come to Peterhof to enjoy its magic charms.

Visit SPb Tram Museum and have a memorable ride on a vintage tram through the historical attractions.
END_OF_DOCUMENT_TOKEN_TO_BE_REPLACED