Street music is an interesting phenomenon that animates the monumental image Petersburg and creates a special atmosphere of creativity in the open air. We picked up a few places in the open air, where you can meet lovers pobrenchat on the guitar and other musical instruments. 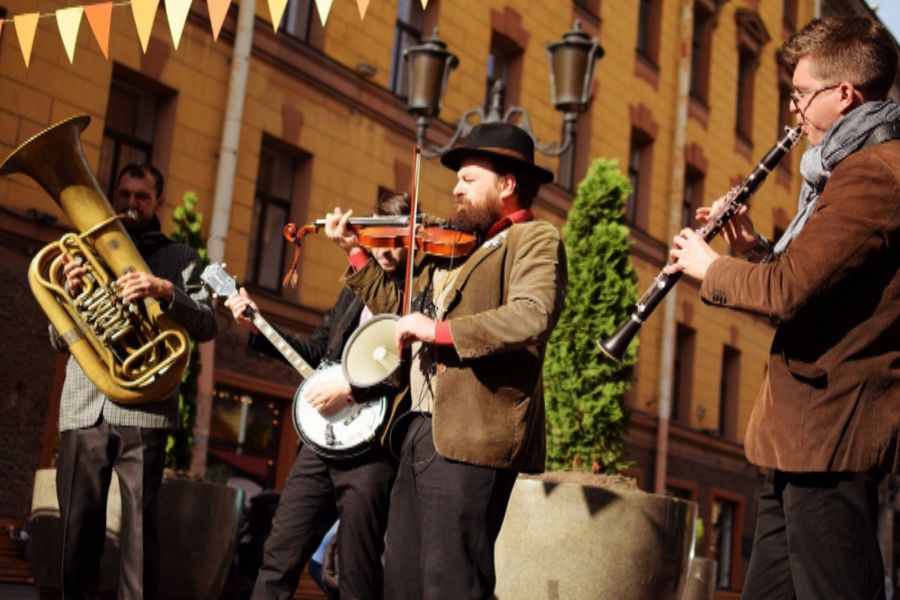 At the entrance to the Gorkovskaya lobby, you can often see an exotic group of people who play ethnicity. They are not disguised artists, but the real Indians from Ecuador are stray musicians with experience. In St. Petersburg, they perform only in the summer, except for tunes bring their CDs, all kinds of baubles and amulets. Even at the "Gorky" sometimes "Person-Orchestra" Mikhail Karetko, who also plays Latin American music.

A small patch between Nevsky and Ostrovsky Square is sometimes called "St. Petersburg Montmartre. " He was chosen by street artists and musicians, among whom stands out Nikolai Gvozdev is a cult figure for our city. For the last 20 years he has been leaving for Nevsky guitar and amp and performs hits of rock, blues and rock'n'roll. Nicholas has no finished musical education, but it does not bother him to gather crowds of fans.

Embankment of the Griboedov Canal.

On the Italian bridge across the Griboyedov canal always boils a life: they hurry to the Savior on Blood tourists, scurry traders with souvenirs, painters write sketches. In the evenings, street musicians. They can be found both at the bridge itself, and closer to the entrance to the lobby of the Nevsky prospectus ".Sometimes it is the trumpeter Uncle Misha.

Embankment of the Griboedov Canal

Next to the Savior on Blood.

In the tourist season the chance to get to the street concert is very large, and at any time of the day. Musicians are arranged at the entrance to the Mikhailovsky Garden, just on the side of the Savior on Blood. Usually groups with arrangements of rock hits act, but there are also bards, and violinists, and interesting collectives with ethnic music.

Embankment of the Griboedov Canal, 2b, liter.A

This is a pedestrian street, so the concentration of street musicians here is great: it does not distract noise of cars, quieter and friendlier public. Most often improvised performances arrange on the corner of Nevsky and Malaya Sadovaya and on the corner of Malaya Sadovaya and Italianskaya streets. At Warm days are immediately "mitered" by mimes, jugglers and living sculptures.

At the pavilion of the station "Ploshchad Vosstaniya"

The exit from the lobby of the Ploshchad Vosstaniya station is well suited for street performances: here it's crowded, but you can stand up so that you do not interfere with passers-by. This is what numerous groups and solo performers: Oxygen Street, Zhenya Morgan, Rico Barcelona, "My personalities are yours." Here there is also the legend of Nevsky Prospekt - Trumpeter Uncle Misha.

Near the shopping center "Gallery"

Representatives of street music get together regularly at the shopping center "Gallery" on Ligovsky Prospekt. Performances are almost every day and in any weather, but the most "fish" dates - this, of course, is the weekend. On Saturdays and Sundays you can see at once several groups that win back their program and give way to the next. On the eve of major holidays like the Victory Day they perform thematic compositions.

Arch of the General Staff

If you are going to the Hermitage in the late afternoon, you can admire the paintings in the museum, and real performances outside its walls. Singers of the streets like to settle under the arch of the Main headquarters, the most daring ones go directly to the Palace Square to the Alexandrian column. The love of passers-by is enjoyed here by Sasha Voxii, who plays rock in the author's arrangement.

At the pavilion of the station "Admiralteyskaya".

It seems impossible to pass through Nevsky and not meet street musicians. They are also found in the Admiralty. Usually the guys are arranged closer to the entrance to the shopping center "Admiral" and play rock covers or own compositions. Here you can find and Basil Chernov, who performs electronics on a 12-string bass guitar.

Next to the Gostiny Dvor.

Another popular point for musicians is Gostiny Dvor. Here they often see the "Strudel" band, which plays cover songs on pop hits, and the collective "Nevsky-B" - one of the most famous street teams of the city.

Next to the monument to the gunner Vasily

On Vasilievsky Island there are not so many places where it turns out to be good to play. One such - pedestrian 6th and 7th lines. For performances, musicians organize themselves at the monuments of the horse and gunner Vasily. There are rock bands, violinists, trumpeters and saxophonists.

Transfer at the metro station "Kupchino"

Active musical life is also found in the far from the center of the district of Kupchino. In the transition the metro station is played regularly by CHEER UP, which performs instrumental covers to famous hits. In the arsenal of the guys - a violin, viola, guitar and a cache. Each of their performances collects crowds of spectators.

Visit SPb Tram Museum and have a memorable ride on a vintage tram through the historical attractions.
END_OF_DOCUMENT_TOKEN_TO_BE_REPLACED