Until the 1890s, elevators were the exclusive prerogative of imperial and grand prince palaces. However, at the end of the 19th century, lifting mechanisms, as they were then called, appear in lucrative homes and institutions. We made them for private orders. Often they were trimmed with valuable wood species, carvings and incrustations, inside for passengers leather sofas were arranged, and elevator shafts were decorated with a unique ornament. Some of these amazing buildings can still be seen. 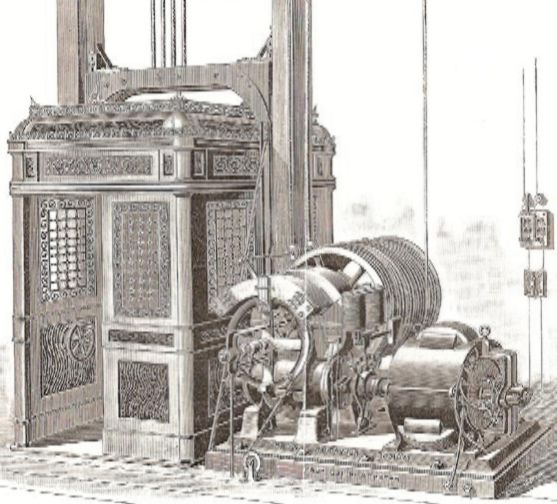 Elevator in the apartment house of merchants Eliseev

It is believed that it was in this house in 1890 that the first elevator in St. Petersburg was installed The apartment house, owned by the merchants Eliseev, was originally built for the rich tenants. Because the elevator there was installed very roomy, although unattractive externally. However, this lifting mechanism brought glory to the architect Gavriil Baranovsky. Information about the unique mechanism for that time quickly spread throughout the city - photos of the house were printed in respectable magazines and discussed in professional circles.

Address
embankment of the river Fontanka, 64

Elevator in the house of S. Muyaki

In the apartment house of the Captain-Guard of S. Muyaki there is one of the most beautiful elevators cities. When building the building in 1902-1903 he was given the main role in the parade entrance. The lift is in the immediate vicinity of the entrance to deliver residents directly to the apartments, not bothering unnecessary movements. The front staircase is hidden behind the elevator. It's amazing that not only the beautiful forged mine, but also the cabin with a semicircular sofa. Moreover, it is still in a working state and Lifting mechanism, however, it is now launched only once a year for verification.

Elevator in one of the houses of merchants Eliseev

Merchants Eliseevs one of the first in the city began to install in their homes, lifting mechanisms. That's when building the building in 1892 in the then Chernyshev Lane money have not regretted. The main staircase and elevator are in a cylindrical space an They are intended immediately for two buildings of the house - the front and the yard. The cabin did not survive, but here is the mine and the doors - in excellent condition. In the windows of the stairs, by the way, are preserved in places old yellow glass with a picture. According to the architect, in the gloomy rainy weather they made the lighting more warm, "sunny" and pleasant looking.

Elevator in the apartment house A. Khrenova

Profitable house of the architect Alexander Khrenov was built in 1909 in Art Nouveau style. In that The same style was maintained and the elevator, installed in the fashion of the time, because the presence of a lift mechanism in the front gave the house status and allowed to rent an apartment more expensive. Even When renting a home on the first floor, the announcement clearly indicated the presence of an elevator. In that house Eldar Ryazanov filmed his comedy "The Key to the Bedroom", where in the episodes involved that the most modern elevator.

Elevator in the house "Singer"

At this address is the house "Singer", where is the "House of Books" and the St. Petersburg office "In contact with". The elevator was installed here during the construction in 1902-1904 when it was already good known American company Otis and was one of the first elevators in St. Petersburg. Modern gold ornaments in the mine and on the doors have been preserved and restored, which is not you will tell about a cabin.

Elevator in the shopping center "Passage"

In the trading house "Passage" there are still two elevators installed during the reconstruction 1900 year. Rather, the forged shafts have been preserved - the cabins have been completely replaced. Because the the building was intended exclusively for commerce (shopping malls alone there were 64), here was installed the largest in those days lift for transportation visitors of the Passage.

Elevator in the Little Mikhailovsky Palace

The Little Mikhailovsky Palace was built for the Grand Duke Mikhail Mikhailovich in 1885-1895 years, and the decoration of the premises lasted until 1900. For those times it's a long time, but you need bear in mind that the building was equipped with the latest technology, and interiors executed with elegant elegance. The building as a palace has never been used - here
there were different organizations. To this day, little has been preserved, but to form a representation about the beautiful decoration can be by a wonderful elevator shaft in combination with carved oak doors.

Elevator in the house of his wifes Kazakova

This elevator does not shake with its architectural sophistication or uniqueness of the mechanism, but the acuity of sensations when traveling on it. The house was commissioned by the wife of honorary citizen Kazakov was built at the beginning of the century, not for the chic audience, so the lifting mechanism in it have established very modest - in the elevator hardly it will turn out to be located together. Now he is like this It functions, all with the same cabin in the same mine. True, the floor is rotten, and the roar worth a spooky, but the daredevils can make an unforgettable journey on the present, not touched by repairs and restorations, an elevator more than a century old.

Elevator in the building of the Volga-Kama Bank

The elevator was installed in this building at the turn of the XIX-XX centuries. Then the house belonged to one of the the richest commercial centers of the Russian Empire - the Volga-Kama Bank. TO Unfortunately, the same elegant elevator was not preserved, but a hundred years after the original The installation of the mine and the elevator were scrupulously restored to old photographs.

Visit SPb Tram Museum and have a memorable ride on a vintage tram through the historical attractions.
END_OF_DOCUMENT_TOKEN_TO_BE_REPLACED