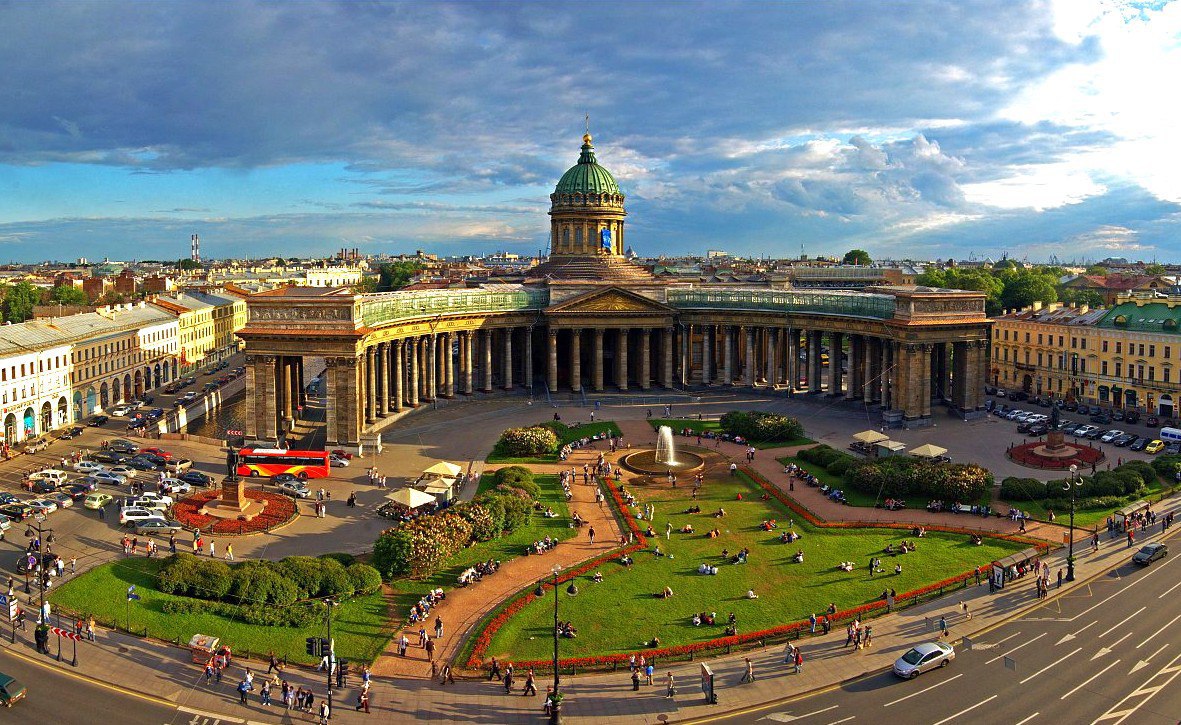 Paul I decided to build a new Kazan Cathedral on the site of the old church of the Nativity of the Blessed Virgin. The emperor arranged a competition of projects - it involved architects Pietro Gonzago, Charles Cameron and Jean Francois Toma de Tomon. Paul I already approved Cameron's work when Count Stroganov recommended him the project of the young architect Andrei Voronikhin, who did not participate in the contest. The Emperor liked his work. Voronikhin was appointed chief architect, and Stroganov - chairman of the board of guardians in the construction of the cathedral.

Paul I wanted the new building to resemble the Roman Cathedral of St. Peter. Andrei Voronikhin designed a grand colonnade, which echoed the project of the Italian temple. 96 columns of the Kazan Cathedral were not located along the perimeter, they flung open to meet Nevsky Prospekt. The lateral north side of the church became a parade. According to Voronikhin's plan, the colonnade was to be erected on the southern side of the church, but later it was abandoned.

The northern gate of the cathedral was cast from bronze on the model of "heavenly doors" of the Florentine Baptistery - the original was created in the XV century by the sculptor Lorenzo Ghiberti. Contemporaries criticized Voronikhin for architectural borrowing and even called the "copyist."

The Museum of Russian Natural Stone

Kazan Cathedral is called a museum of Russian natural stone. The main decorative material was the calcareous tuff, which was mined in the Gatchina district. Pudost stone, as it is called, was similar to the Italian travertino, from which the St. Peter's Cathedral was built. Tuff with a porous structure was easily processed, it was used for facing the outer walls of the cathedral, creating capitals, friezes and platbands. In the interior decoration of the temple Voronikhin used Karelian marble, local porphyry, jasper. The interior of the cathedral was decorated with 56 columns of pink granite with gilded capitals.

Both outside and inside Kazan Cathedral is decorated with sculpture and bas-reliefs. Bronze statues of Saints Vladimir and Andrew the First-Called, John the Baptist and Alexander Nevsky were created by Stepan Pimenov, Ivan Martos and Vasily Demut-Malinovsky. Above the reliefs of the interior and facades, worked Fedor Gordeev, Jacob Rachett, Ivan Prokofiev.

The walls of the cathedral were decorated with paintings by famous painters - Karl Bryullov and Fedor Bruni, Vasily Shebuyev and Vladimir Borovikovsky. The original iconostasis in 1837 was replaced by a silver one - it was created by the architect Konstantin Ton. Not only eminent masters worked at the construction of the cathedral: in 1810, the serf artist Taras Ivanov was bought from the landowner Teplov for a thousand rubles.

Temple Museum of the Patriotic War of 1812

The Kazan Cathedral was inaugurated the year before the Patriotic War of 1812. Before leaving for the army, Mikhail Kutuzov, who had just been appointed commander-in-chief, visited the temple. After the war, trophies were delivered to the Kazan Cathedral - military banners and standards, keys to captured cities and fortresses, the marshal's baton of the French commander Louis-Nicolas Davout.

In 1813 Mikhail Kutuzov, who died of a cold, was buried in the church. The grate and the tombstone for his grave were made according to the drawings of Andrei Voronikhin.

In 1837, Russia celebrated the 25th anniversary of the victory over Napoleon. On the square in front of the cathedral, monuments to the field marshals of the Patriotic War - Mikhail Kutuzov and Mikhail Barclay de Tolly - were erected.

Church of the Romanov dynasty

Church of the Nativity of the Virgin was the court of the house of the Romanovs. Here was kept the list of the icon of the Kazan Mother of God - it was considered the patroness of the dynasty. When the Kazan Cathedral was built, he inherited both the shrine and the role of the court temple. All the members of the royal family were married here, thankful molebens served after the unsuccessful attempts on Alexander II, here celebrated the 300th anniversary of the Romanovs' house.

In the sacristy of the cathedral were kept the gifts of the imperial family: the Gospel in a silver gilt salary of over 33 kilograms, a cross of lapis lazuli, a golden church bowl adorned with diamonds, rubies and a mammoth bone.

The temple was consecrated in honor of the Kazan Icon of the Mother of God, one of the most famous Orthodox shrines. The cathedral keeps its list, which is also considered miraculous. It is believed that Peter I personally ordered to deliver the shrine to St. Petersburg, and before the construction of the Church of the Nativity of the Virgin, the icon was kept in the chapel on the Petrograd side.

After the Patriotic War of 1812, Mikhail Kutuzov brought to the Kazan Cathedral more than 100 kilograms of silver mined from the French. It was used to decorate the Kyoto icon of the Kazan Icon of the Mother of God and the iconostasis of the main chapel.

In the XIX century in the Kazan Cathedral there was a Sunday school for adults, a newspaper came out, the temple was a well-known charitable center. During the First World War, food and warm clothes were collected here to be sent to the front, one of the first hospitals in Russia was opened with parishioners' money and church funds. He was under the auspices of the Empress Alexandra Feodorovna. In the church itself, a moleben served daily to grant victory over the enemy.

Museum of the History of Religion and Atheism

In 1929 Kazan Cathedral was closed, and three years later the building was transferred to the Academy of Sciences. On the dome of the church, instead of a cross, a gilded ball was installed with a spire, church utensils were distributed between city museums. Inside the cathedral there is the Museum of the History of Religion and Atheism. His exposition told of the emergence and development of Christianity, Islam, Eastern beliefs. Here you can see a collection of Orthodox icons of the XVII-XX centuries, amulets and amulets, ritual objects and the largest collection of books on the history of religion and religious studies.

Relics in the attic

For nearly 20 years, the relics of the saints, which were kept in the church, were hidden in the attic of the Kazan Cathedral. Employees of the Museum of the History of Religion and Atheism moved there the relics of the Holy Prince Alexander Nevsky, St. Zosima, Savaty and Herman of Solovki, St. Seraphim of Sarov, St. Joasaph of Belgorod. Only in 1991 the shrines were returned to the temple, and the relics of St. Joasaph were sent first to Moscow, and then to Belgorod.

Visit SPb Tram Museum and have a memorable ride on a vintage tram through the historical attractions.
END_OF_DOCUMENT_TOKEN_TO_BE_REPLACED