Monuments to tsars in St. Petersburg: from Peter the Great to Paul the First

St. Petersburg — is not only the city of three revolutions, but also a city of dozen of emperors. Imperial statues mark the historic center as well as the rivers and canals, and this is purely St. Petersburg phenomenon — figured monuments to monarchs appeared in Russia for the first time just at that spot. The reputable Moscow tsar didn't even come upon with te thought to honor his bearded predecessor with a full length statue. And almost complete Romanov's range gathered on the bank of Neva: three Alexander, two Nikolay, Ekaterina and Pavel. And the person responsible for all this things - Peter.

There are a lot of Peter the Great's monuments in the city — stone, bronze, wax, porcelaneous, chocolate and just masked. Actually there are at least five monuments, and their number smoothly increases. The tsar-reformer, the avant-gardist and the inventor, provokes art experiments therefore such expressive creations as the Bald monster ("Lysyj monstr") of Mikhail Shemyakin sitting opposite to the Raman  table-tomb in the Peter-Paul Fortress are born. The Bronze Horseman also was not less scandalous for its time, but we suggest beginning a review of tsars with more, at first sight, traditional monument. From an equestrian statue of Carlo Rastrelli, the father of the great architect, in front Engineers’ Castle. "The great-grandson of his the great-grandfather" — it is laconically written on a pedestal. It was Pavel I, since recently taken the place nearby, behind the back of the great-grandfather, in the courtyard of the lock too (we'll speak about it later). Everything is in great state: the tsar in the Roman armor and laurel wreath, a proud quiet horse, a high pedestal with subject bas-reliefs. Laurel leaves on Pyotr's head stand on end like tongues of fire, and replace a crown. Generally, the exemplary knight on a classic horse. If not to take stock of.

If to take stock of it, it is possible to notice that Rastrelli three centuries prior Shemyakin has resolutely distorted model proportions — he has strongly expanded Peter in a breast, having given a power to the rider. The portrait similarity remained, but all that is liked to be represented by masked Peter- actors — a furious look and some hysteria of the impetuous lanky tsar has disappeared. Behind  the Saint Michael's Castle the embodiment of  sovereign importance flaunts.

Between the First and the Second

For the period from Peter the Great's death before to enthronement of his daughter Elizabeth four insignificant monarchs alternated on the Russian throne  — Catherine I, Peter II, Anne of Russia, John VI with mother-  precentress Anna Leopoldovna. All of them dispense with capital monuments, except for a magnificent sculptural composition of the same Rastrelli "Anna Ioannovna with a Little Negro Boy". It opens an exposition of the Russian Museum. Elizabeth Petrovna has no own statue in St. Petersburg too. It is unfair — the beloved daughter of Peter was peculiar, but bright ruler.

Generally, "Elizabeth was a cheerful queen". Her love to balls and masquerades coupled with sincere religiousness, five thousand dresses and empty treasury shut off other achievements: Elizabeth, for example, abolished the death penalty in Russia and opened the Moscow University.

After all she had one monument, but it didn't remind up to nowadays. Not bronze, not marble, but "biscuit" (from opaque porcelain) the bust of the queen was put in the yard of the Imperial Porcelain Factory in 1895, constructed under her rule.

Elizabeth was inherited Peter III — one more hapless tsar who hasn't deserved a monument.  As distinguished from his wife. Catherine II — in every sense is the second after Peter I, and a monument at Ostrovsky Square behind the Alexandrinsky Theatre — an imperial monument, the second for popularity. It is in fifteen minutes of walking from the Raetrelli's Peter. The emperor specifies by a staff approximately there, aside the "Kat'kin sadik" (the garden of Catherine the Great). It is necessary to pass  rightwards by Manezh Square, then on brisk and ugly as all "arbat" of the country, Malaya Sadovaya street, then through Nevsky — to the square with a four-meter multifigured monument. Catherine in a ceremonial dress highly raised a sceptre, and her companions: Potemkin, Suvorov, Rumyantsev, Bezborodko, Betskoy, Chichagov, Orlov, Dashkova and Derzhavin settled at her feet.

To see the son and successor of Catherine the Great, it is necessary to return to Engineers' Castle. And it is necessary to do it till 18:00 because rather new monument is opened "in working hours of the organization". In the evening the yard is locked, and it adds a sort of symbolism to the less than stellar sculpture: the unlucky emperor in the depth of the yard is protected with a lattice from the big world as the eternal prisoner of the place where has found his death.

The monument appeared in 2003, it is very theatrical and excessive. Pavel with an intense face, in full imperial vestments, in awards, with the sceptre and the ball, sits solemnly on a fancy throne, having put legs on a small funny backless stool. Behind him two decorative columns of not clear assignment are hoisted, and all of this is placed in a black-black coffin-shaped pedestal. With knobs on misfortune the monument was literally pushed in a corner — it was moved from the center of the yard to the wall "for the convenience of visitors". Generally, Saint Michael's Castle is cold to its owner and even after his death. "Enough adolescent, it's time to wield the sceptre" — with such words count Palen bided farewell  the new emperor Alexander I after Pavel's elimination. The passive parricide, Napoleon's winner, the tsar-reformer and the tsar-mystic has no full-fledged personal sculpture in St. Petersburg. Nevertheless his monument is the more powerful and highest than others — the Alexander Column in Winter Palace Square. The face of an angel is if given similarity to the face of Alexander Pavlovich who was called "angel", but it is impossible to catch this similarity — it's just like a simple angel, sexless and passionless. Considering all dark legends around the tsar, as if played his own death in sad Taganrog for the purpose to wander and offer prayers to God for forgiveness under the guise of starets  Fedor Kuzmich such person suits him. 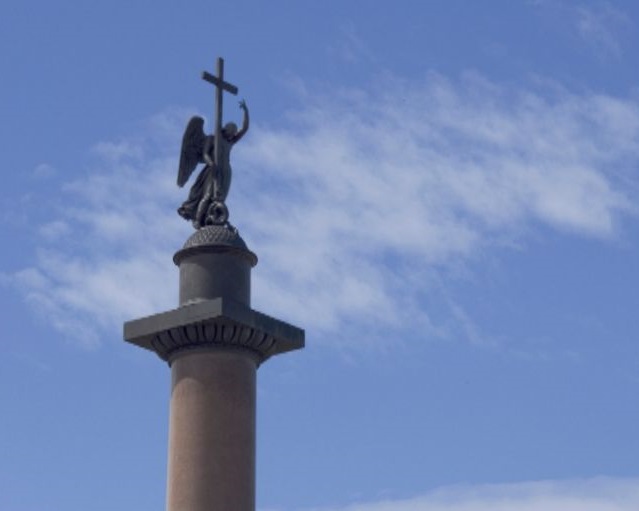 Romanovy in a stone. Part two

Visit SPb Tram Museum and have a memorable ride on a vintage tram through the historical attractions.
END_OF_DOCUMENT_TOKEN_TO_BE_REPLACED