If a person of art is building a house in which he is going to live, usually something interesting comes out. A masterpiece of avant-garde-Melnikov's house-proof of that.Let's look at the houses built by other Russian architects and artists for themselves and their families, together with Sophia Bagdasarova. 1721-1723: Domenico Trezzini
The house of the Italian architect, who came to Russia at the invitation of Peter the Great and designed for him half of the then St. Petersburg. The building was rebuilt (the third floor was added). Recently, after reconstruction, it opened a hotel named after the architect, and in front of his statue. 1817: Mikhail Malakhov
The Creator of the classic appearance of Yekaterinburg, he and his estate, of course, built in the same style. The building with a mezzanine in the basement was stone, and above-wooden. The house was badly damaged, in the 1970s was dismantled, completely renovated and moved deep into. Today it is one of the buildings of the Ural Academy of architecture and art. 1848: Ivan Aivazovsky
A native of the Crimea, earning a fortune, settled in his native lands and closer to his favorite model — the sea. He built his house in the southern "Renaissance" spirit. In the late 1840s, Aivazovsky opened his rooms full of paintings for visitors, then built a special gallery. Today it is Feodosia national art gallery. I. K. Aivazovsky. 1852: Mikhail Lopyrevsky
The son of the Freedman-architect Osip lopyrev (or the illegitimate son of Prince Golitsyn) in the history of the capital's architecture entered the project of his own house (although he was engaged in the restoration of the Spasskaya tower of the Moscow Kremlin). A wooden one-storey mansion in the neoclassical style adorns one of the Arbat lanes. Now, after a large-scale restoration, it is occupied by a private company. 1892 year: Vasily Polenov
Having bought 80 tithes of land from the impoverished landowner, the artist has equipped there everything to the taste: "Big house "for a family, a workshop — "Abbey", a hut for children, a half-timbered shed and a set of services. Today, the complex of the Museum-reserve "Polenovo" also includes the neighboring Church of the Holy Trinity, which Polenov in 1890-1907 years built for local peasants, and for himself, of course. 1893-1894: Victor Vasnetsov
The best Russian artist-storyteller himself drew what will be his "Teremok". Vasnetsov with his family, and then his children lived in the house until 1953, after which the descendants of the painter gave it to the state. Today it is a branch of the Tretyakov gallery. 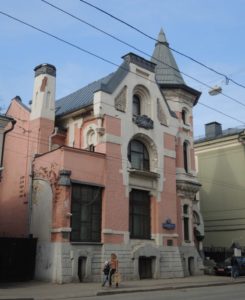 1900-1903: Lev Kekushev
Well-known Moscow architect (the author including the "Metropol" hotel) was built on Ostozhenka lovely mansion in art Nouveau style with a pattern of leaves of chestnut, ash, and hemp. For many years there was a Defense Department of the Embassy of the Arab Republic of Egypt, and in 2015 it was announced that the building will be restored and put up for auction. 1900-1906: Ilya Repin
The famous artist, like many other Petersburgers, got a cottage in Kuokkala (now Repino). The house, which he built on his project (necessarily with a large bright workshop), Repin named in honor of the Roman gods of the hearth — "Penates" (Penaty). There he lived until his death, becoming an immigrant without moving: after the revolution, the house was in Finland. After the return of Kuokkale under the will of the artist's wife, the house moved to the Academy of arts to create a Museum Repin. 1903-1913: Maximilian Voloshin
Crimean dacha with large Windows, a workshop in the difficult years of the Civil war was the only home and refuge for many friends Voloshin. After his death, until 1976, the widow of the artist and poet continued to live here, although the building itself passed to the Union of writers by will. Since 1984 it is a Museum. 1904-1906: Robert Melzer
The architect of the Imperial court (Imperatorskiy dvor), who was engaged in the decoration of many palaces, including he made the fence and the gate of the Winter Palace (Zimniy dvorets). He also worked for the Nobel. In General, of funds to own a mansion to have enough — get a toy in art Nouveau style. After reconstruction in 2008, this wooden house entered the complex of the presidential state guest residence on the Stone island of St. Petersburg. 1910: Konstantin Korovin
The artist got to Gurzuf at the invitation of Chekhov, but could not live in his house: too much noise from the sea — and built his own away. He called the mansion "Villa Salambo" (in honor of the ballet at the Bolshoi, where he was the author of the scenery) and repeatedly wrote in his paintings. Today it is a private house of creativity and rest named after K. A. Korovin, in other words — a boarding house. There is also a memorial room and a Museum in honor of the artist. 1910 year: Fyodor Shekhtel
The chief architect of the Russian art Nouveau in Moscow built himself three mansions: the first-in the area of Leningrad Avenue, the second — in Ermolaevsky lane, the third, the most famous — on the Sadovoe ring. Curiously, this is not modern, and neoclassical. After the reconstruction of the 1990s, the building is occupied by a private Fund.

Visit SPb Tram Museum and have a memorable ride on a vintage tram through the historical attractions.
END_OF_DOCUMENT_TOKEN_TO_BE_REPLACED