Yamskie and post stations. The first hotels in Russia appeared in the XIII century. Standing courtyards as points on the map of trade routes. Accepted guests that traveled primarily on business - postal or official.

The prototype of modern hotels is the XVIII century. Following the big cities and built large Inns. Here you can not just rest during the journey, but relax in comfort. 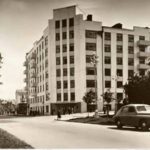 The barn, which became a hotel. The monument of civil architecture of the XVII century on the territory of the Ryazan Kremlin. A two-storey stone building was built by architect Ustinov to store food supplies in the Arkhiyereyskiy dvor . Two centuries later, the building was adapted for a hotel. 14 rooms intended for roadways monks Chernetsov. To each door of the main facade once led a separate wooden porch, only one has survived to the present day. Now the hotel is part of the architectural Museum — reserve. The exhibition tells about the history of Pereyaslavl Ryazan and military glory. About what the medieval city lived and how it defended its borders for many centuries.

The same age as the twentieth century-hotel "Metropol" in Moscow. The majestic building in the art Nouveau style with a view of the Bolshoi theater appeared on the initiative of Savva Mamontov. The project was executed by the British William Walcot. Mammoths went bankrupt, the customer was replaced, and behind him a dozen architects, but in 1905, "Metropol" completed. The interiors based on sketches by Viktor Vasnetsov and Konstantin Korovin, majolica panels, including the painting by Mikhail Vrubel "Princess of Dreams" — contemporaries considered the hotel a Manifesto of new art. The hotel in the historical center was doomed to an unusual history. In the revolution, the hotel was taken by storm. The unique interior was made by Lenin and Trotsky. Sergey Prokofiev, Alexander Kuprin, Bernard Shaw, Marlene Dietrich and John Steinbeck stayed here.

Elegant, exquisite, monumental. "Astoria" was built a hundred years ago with a claim to the title of the most comfortable hotel in St. Petersburg. And surprised the whole of Europe. St. Petersburg architect Fedor Lidval in his project provided even a winter garden and a library. The architectural elegance was called upon by the neighborhood with St. Isaac's Cathedral. Most of the colleagues in the shop approved the work of Lidval, noting the "elegant and neat" facades. "Astoria" has been in the center of all the historical events of the Northern capital. As argued by contemporaries, in her winter garden Hitler planned to have a Banquet in honor of his victory. But there were peaceful guests: Herbert wells, Margaret Thatcher, Fyodor Chaliapin... In 2007 Astoria was among the ten most romantic hotels in the Forbes list.

Once the highest building in Perm-seven floors. Hotel "Central". The building with elements of constructivism was built in 1930 by architect Fedor Morogov. "Noah's ark" and "the abode of the muses." These poetic names are part of the history of the provincial hotel. During the great Patriotic war lived here in the evacuation of the ballerina Galina Ulanova and Natalia Dudinskaya, the composers Sergei Prokofiev and Aram Khachaturian, writers Veniamin Kaverin, Yuri Tynyanov and Vitaly Bianki, Osip and Lilya Brik... Kaverin wrote here "Two captains", Khachaturian — ballet" Gayane", Tynyanov — the novel" Pushkin", Lilya Brik — combined letters of Mayakovsky in the book" Schen". On the facades at first glance, the usual, and at that time "sublime home" may simply not have enough space for commemorative plaques.

Hotel on the sea coast. Hotel "Marino" in Yalta-part of the tour of Chekhov's places. The former cottage of Kazimir Benkovsky in the NINETEENTH century thanks to the architect Nikolai Krasnov has gained its refined appearance, and the famous guest — Anton Pavlovich Chekhov — added romanticism. According to local legends, in these places — from a café opposite the hotel — Chekhov pesona Dmitry Gurov noticed the lady with the dog: "Sitting in the pavilion at Vernet, he saw on the promenade was a young lady, short blond, in a beret; behind her ran a white Spitz". These walls remember Maxim Gorky, Vladimir Mayakovsky, Marius Petipa and a strong earthquake, after which the building lost part of its bourgeoisie: it was necessary to remove the decorative borders and vases.

Visit SPb Tram Museum and have a memorable ride on a vintage tram through the historical attractions.
END_OF_DOCUMENT_TOKEN_TO_BE_REPLACED