The northern capital remains one of the most popular tourist destinations in our country.
We suggest you stroll through the famous palaces and parks without leaving your house. 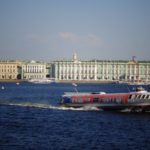 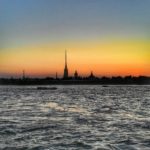 One of the largest art and cultural historical museums in Russia and the world.
The museum begins its history with collections of works of art, which were purchased privately by the Russian Empress Catherine II. Initially, this collection was housed in a special palace wing - the Small Hermitage (from the French ermitage - "a place of solitude", "cell", "shelter of a hermit", "seclusion"), from which the general name of the future museum was fixed. In 1852, from the greatly expanded collection, the Imperial Hermitage was formed and opened to the public.

The State Hermitage Museum is a complex museum complex. The main exposition part of the museum occupies five buildings located along the Neva River embankment in the center of St. Petersburg, the main one of which is the Zimniy Palace. The collection of the museum has about three million works of art and monuments of world culture, from the Stone Age to our century.
It is one of the top twenty most visited art museums in the world.

The first state museum of Russian fine art in Russia was founded in 1895 in St. Petersburg by the Decree of Emperor Nicholas II and opened to visitors in 1898.
The project of the Mikhailovsky Palace was completed in 1819 by Carl Ivanovich Rossi. Almost all the major architectural ensembles that have become the visiting cards of Petersburg, from the Senate Square to the Elagin Palace, have been created by him. As part of the work on the project Mikhailovsky Palace Rossi carefully planned the entire surrounding area, which was a wasteland. He laid additional streets (Mikhailovskaya and Engineering) and formed theCultural Guide to St. Petersburg Iskusstv Square, where today the main museum building is turned. The reverse side of the palace opens into the garden with the same name on the bank of the Moika River.

For its more than a century of history, the museum has turned into an extensive complex, unmatched in the country. This is an art collection, and the famous restoration center, and a research institute. Funds of the museum library contain about 170 thousand printed publications. Each year, various collections travel to world museums, and the doors of the Russian Museum, in turn, open for about 50 temporary exhibitions. Since 1997, the international society Friends of the Russian Museum has been working, uniting patrons and cultural figures who contribute to the preservation and replenishment of the collections of the famous treasury of Russian art.

Elagin Island is a rare idyllic place, almost a paradise pastoral, silence and grace. But in fact, it is located in the very center of the city, what was far outskirts, has become a real geographical center. Elagin Palace was the first building of Carlo Rossi in St. Petersburg.

Peterhof was founded at the very beginning of the XVIII century by Emperor Peter I and became one of the most luxurious summer royal residences and a symbol of Russia's conquest of the access to the Baltic Sea. Every year Peterhof is visited by four and a half million people. It includes the sights of the southern coast of the Gulf of Finland.

Having built the Stock Exchange in St. Petersburg, the architect Tom de Tomon made a real breakthrough in European architecture. He turned the water space into a square and closed the main St. Petersburg triangle, the tops of which are the Petropavlovskaya Fortress, the Zimniy Palace, the Birzha.

Visit SPb Tram Museum and have a memorable ride on a vintage tram through the historical attractions.
END_OF_DOCUMENT_TOKEN_TO_BE_REPLACED